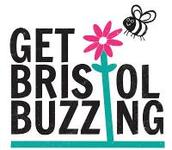 We topped 200 plant species! Check out some of the park's gorgeous wild flowers, pictured here. ​In a city, parks and gardens can be crucial areas to help wildlife, as increasing numbers of our wild flowers and insects that depend on them are threatened with extinction. We have lost 97% of Britain's wild flower meadows since the 1940s. A good range of native flowers offers a lifeline to urban pollinator species and underpins food webs.

Research scientists from the University of Bristol's Urban Pollinators Project planted an experimental wild flower area in Victoria Park in 2011, for a 3-year study that sampled 7,000 pollinators in UK cities. They found remarkably high pollinator species richness in cities, especially bees. This highlighted the important value of flower-rich oases in cities for pollinator conservation. At our bioblitz we recorded plants throughout the park and found the university's colourful research flower strip still blossoming in the meadow above the wooden play area.

The research team set up Get Bristol Buzzing, to encourage everyone to help pollinators by planting more nectar sources. Victoria Park Action Group is part of this effort. As well as agreeing with the council to have long grass nature areas, volunteers have worked with schools and community groups to dig and sow even more native flower areas this year. The flowers will take a while to establish. Some of the annuals appeared this summer and are shown below. More perennials will appear next year.

The UK’s 26 species of bumblebee pollinate a large variety of our flowers, alongside 1,500 other types of insect, including honeybees, solitary bees, hoverflies, wasps, butterflies, moths, bugs and flies. Together, pollinators give us more than a third of our food crops.

We found 21 bird species and enjoyed workshops with Richard Bland and Matt Collis. Among the 123 invertebrate species, our moth survey leader Neale Jordan-Mellersh noted the number and range of moths was pleasing for an urban park, and commented that it would not take much effort in habitat improvements to achieve greater diversity. The large range of minibeasts and surveying tools kept experts Patty Ramirez and Tony Smith very busy before, during and after the event, as well as preoccupying everyone of all abilities!

David Hill recorded 47 lichen species. The presence and absence of certain lichens tells us about local air quality. The diversity found suggests air pollution is lower than a few decades ago – for example Melanelizia and Flavoparmelia species are present which do not tolerate higher nitrous oxide levels.

Children discovered hedgehog footprints during our mammal tunnel surveys in the park, set up by Laura McClauchlan using ink, paper and food. Some of he footprints are shown here. We met live baby hedgehogs being cared for by Yvonne from Hedgehog Rescue, and we found out how to make a hedgehog home and clay hoglets. Hedgehogs are a priority species in Bristol. 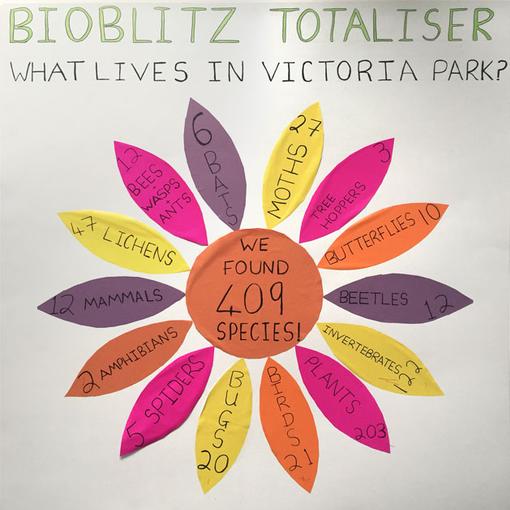 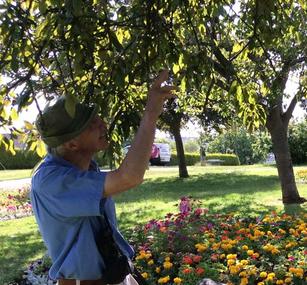 ...AND A WHOLE LOT MORE WILDLIFE TOO!

"SOME OF THE FINEST TREES IN BRISTOL"

Renowned Bristol naturalist, Richard Bland, was impressed by the range of trees he recorded during Victoria Park Bioblitz. “The avenues of trees are some of the finest in Bristol," he said. "There are two veteran Small-Leaved Limes that pre-date the park, and two Purple-Leaved Sycamores, a tree that is rarely planted or noted, and these are the two best ​in Bristol.